Since the early 1920s, Wembley Stadium has been turning out packed crowds, supporting major music and humanitarian events as well as being the centerpiece for sport in England.

When Wembley reopened in 2007 after a painstaking four-year renovation, it regained its perch at the very top of iconic English stadiums. Wembley’s 133m (436ft) arch became a revered part of the London skyline.

If you are in or planning to visit England, and if you have any kind of interest in sport, I highly recommend including a visit to Wembley on your itinerary.

Whether you’re heading to a game or attending a concert, or you just want to see the stadium itself, a tour of Wembley Stadium is the best way to dive into its history.

There are a few options to choose from including the:

All last around 90 minutes and come with an expert guide who will lead you to the best parts of Wembley Stadium including changing rooms and the Royal Box, where you will have the opportunity to lift a replica of the FA Cup.

Finish off the standard tour with a visit to the players’ tunnel and explore memorabilia including the original rules of Association Football, dating back to 1863.

The VIP Experience takes things a step further going into even more exclusive parts of the stadium and the possibility of having your tour guide all to yourself.

But for the best experience at Wembley, why not combine your matchday ticket with a tour of the stadium?

This tour follows the usual route, but also includes the ability to be pitch-side when the teams are warming up. It doesn’t get much better than that.

You can book your tours right here.

Wembley has hosted many iconic events since it first opened in 1923, from the dual Olympics, England’s famous World Cup victory, and of course, Live Aid in 1985.

As the largest sports and entertainment venue in the UK, it didn’t take long for the new iteration of Wembley to make its mark.

It broke numerous Olympic crowd records and one out of every 10 tickets sold at the 2012 London Olympics was for an event at the stadium.

After all, Wembley provides the ultimate sporting experience and is not to be missed. Here are the must-see events held every year at Wembley Stadium.

Each May Wembley’s capacity crowd of 90,000 sells out for the biggest annual football match in England.

Every year this stadium hosts a bevy of major, worldwide events but none manage to top the FA Cup final. After all, Wembley may be many things, but it is first and foremost a football stadium.

The FA Cup, sometimes known as the Football Association Challenge Cup, is the oldest football tournament in the world.

It began in 1871 and has run every year since (with the exception of the World Wars).

The competition itself runs in line with the domestic football leagues and is open to all teams from the top-flight down to the 10th level of football in England.

The better the team, the later they enter. Much of the charm of the FA Cup is seeing pesky underdogs claw their way to victory against more fancied opponents.

Not every year can have a Cinderella story, but there is always drama as the two finalists battle in front of almost 100,000 supporters.

The battle for tickets is just as hotly contested and tickets will need to be purchased well in advance if you want to see the biggest annual sporting event on the English calendar.

Head to TheFA.com to view the latest match tickets availability. 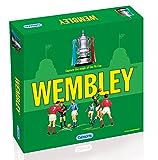 Like the FA Cup, the Challenge Cup is a rugby league knockout tournament held throughout the season and is one of the most prestigious matches in the world of rugby.

The Challenge Cup features amateur, semi-pro, and professional teams, with the best teams slowly whittled down to two. Those two victorious teams, of course, make their way to Wembley for the championship final.

The Cup has run annually since the late 19th century with the exception of World War I (The Challenge Cup was allowed to go ahead for much of the Second World War to help boost morale among the nation).

Post the war, the final was first moved to Wembley which saw a huge spike in attendance. With fans drawn to the excitement of the game and the prestige of England’s grandest stadium.

Tickets to the Challenge Cup Final are not as hard to get as those to the FA Cup, however, you should book ahead of time in order to get your hands on a great seat close to all the action.

Aside from major sporting events such as the FA Cup and the Olympics, Wembley Stadium has an impressive reputation for providing epic concerts to fans.

The history of the stadium’s legendary gigs makes Wembley hallowed turf for musicians who dream of standing on the stage and performing.

The most famous of those concerts was Live Aid, held here in 1985. In front of 72,000 fans, multiple musicians went to work to help raise funds for the famine in Africa.

It inspired a worldwide movement and spurred the largest television broadcast of all time. It is estimated almost 2 billion people tuned in to the various Live Aid events, which at the time was 40% of the world’s population.

Its concert calendar is just as busy as the sporting one and taking the opportunity to catch a live act is a great way to see what Wembley Stadium is all about.

Learn about all Wembley concerts

How to Get to Wembley Stadium

You will be happy to know that Wembley is easily accessible thanks to multiple public transport options, including a total of three railway stations.

A direct fifteen-minute walk exists between the station and the stadium itself. Wembley Park Station is wheelchair accessible and has low-level ticket machines.

The station is connected to London via the Jubilee and Metropolitan lines.

This station is slightly further away with around a 20-minute walk to Wembley. This station has low-level ticket machines, however, is not step-free from platform to train.

This station is serviced by the Overground, Bakerloo Line, and the Midland and Southern Lines.

Wembley Stadium Station is the closest of the three stations, at only 7 minutes from the stadium. The station has thorough wheelchair access and low-level ticket machines.

However, it is only serviced by Chiltern Railways.

If you aren’t close to a station you can take a bus to the stadium.

There are a total of eight bus routes that connect Wembley Stadium with central London. Grab an Oyster Card to make using London’s public transport a breeze.

Stadium parking is available, however, you will need to book in advance in order to secure your parking spot.

Wembley Stadium has a great Sofa-to Seat tool that will have you plan your adventure to the arena.

Where to Stay in London

Before and After – Wembley Local Area

The sheer size of Wembley Stadium may surprise you on your first visit. It is more than just a football field surrounded by 90,000 seats.

Wembley Stadium has a total of 34 bars, and 8 restaurants, including some of the biggest in London. All counted, there are 688 food and drink service points, and just shy of 100 kitchens. The estimated amount of beer poured at a sporting event here comes in at over 40,000 pints!

You can feel safe and happy knowing there are plenty of options to eat and have a pint before and after your match or event. But, like a lot of stadiums, food and drink aren’t exactly cheap and maybe you want to explore more of the Wembley area.

The London Designer Outlet is only a short trek away from the stadium and comes with a ton of food and drink options. These tend to be more of the food court variety but will help fuel you for the big game.

If you want to get into the British spirit, visit a local Wembley pub.

Options include the Green Man Pub and Hotel, which comes complete with a large beer garden, perfect for those warm summer days.

For those who can’t get enough of their sports, The Torch is a popular local sports bar that is sure to have a great atmosphere on matchday.

Other Stadium Tours also to Consider

Hi there! I’m Dr Paul Symonds and I’m the owner of Symonds Sports. I’m a sports fanatic who travels worldwide to see major sports events and I love seeing & trying sports in different countries. Thank you for visiting this site. More on me here..